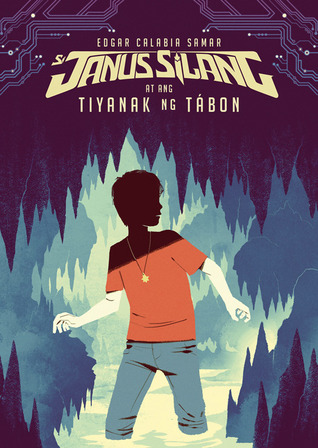 Opinions expressed in this review are completely my own.

Last year, Neil Gaiman, who is one of my favorite authors of all time, was asked by a Filipino fan if he ever considered writing a novel based on Philippine folklore and mythology. When I saw this, I was thrilled because there is no doubt Gaiman is a master storyteller of myths and folklore. However, he responded, “I really LOVE the myths and monsters of the Philippines. But you also have many terrific writers there who can do a better job of telling those stories than I can.”

“Who would do that job, then?” this question popped up on my mind. Mythical creatures from other countries such as faes, dragons and werewolves are well-known. How about our own creatures? Although most of the Philippines mythical creatures are not as charming and beautiful as them, they’re also rich in interesting stories waiting to be told. Little did I know, a Filipino author already did a remarkable job.

Si Janus Silang at and Tiyanak mula sa Tábon by Edgar Calabia Samar revives Philippines Mythology through a modern-day setting. This is about an online game tournament TALA (Terra Anima Legion of Anitos) where all the players mysteriously died except for one boy named Janus Silang. Written from a third-person point of view, the world-building and TALA’s mechanics are carefully explained. The plot is fast-paced, dark, and original. The subplots, backstories, and foreshadowings were smoothly connected. I really like how the author created new flavors and twists to the backstories of creatures that I’ve known since I was young. I did not expect that this book would frighten me.

What I really loved about this book is Janus himself. He’s relatable, and he reminded me of shenanigans I also committed when I was his age. Just like other kids his age, he’s into technology and games. Sir Egay did a great job portraying a teen character who can easily capture a reader’s heart.

I am a little bit ashamed of myself for not knowing this book sooner. I hope that Janus Silang would be translated in English so International readers can also read this gem of Philippine Literature. This series deserves more love!

Overall, Janus Silang at and Tiyanak mula sa Tábon is a such a great book to introduce Philippines Mythology and Culture to young readers. Allow me to give you advice if you are planning to read this book: don’t read this after dark.

Edgar Calabia Samar is a multi-awarded poet and novelist from the Philippines. His first novel, Walong Diwata ng Pagkahulog, received the NCCA Writer’s Prize in 2005, and its English translation as Eight Muses of the Fall was longlisted in the Man Asian Literary Prize in 2009. In 2013, he received two Philippine National Book Awards––one for his second novel, Sa Kasunod ng 909 (Best Novel), and another for his book on the creative process, Halos Isang Buhay: Ang Manananggal sa Pagsusulat ng Nobela (Best Book of Criticism). Si Janus Silang at ang Tiyanak ng Tabon, the first book in his YA series Janus Silang, also received the Philippine National Book Award for Best Novel in 2015 and the Philippine National Children’s Book Award for Best 2014-2015 Read in 2016. He has also received prizes for his poetry and fiction from the Palanca and the PBBY-Salanga Writer’s Prize. His other books include Pag-aabang sa Kundiman: Isang Tulambuhay, a poetry collection, and 101 Kagila-gilalas na Nilalang, a children’s encyclopedia of Philippine fantastic creatures. In 2010, he was invited as writer-in-residence to the International Writing Program of the University of Iowa.