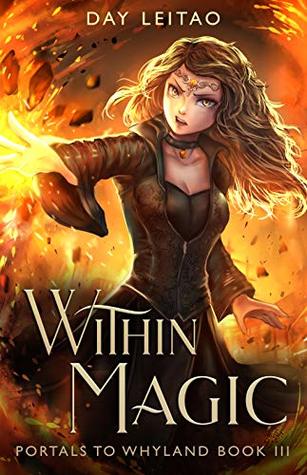 More adventure, romance, intrigue, and magic!
Karina trusts strangers in the faint hope of finding her way back to Whyland, troubled by dreams about Sian in grave danger. But there are more dimensions and more enemies than she expected. With her life on the line, even her own mind is not safe.

Sian has an impossible task: challenge and defeat the gigantic Maris king. In his struggle, he’ll find out he’s more dangerous than even he’d ever thought, and so much more than he’d ever imagined.

Darian and Cayla find their peace shook by new revelations, leading them to confront their past and define their identities.

Find out how the story ends in Within Magic!

I received a copy of this book from the author. Opinions expressed in this review are completely my own.

Have you ever felt nervous and excited when you finally start reading the last book of a series? Those feelings where you do not want the story to end, but you’re also curious about how the story wraps up? Because that’s what I felt when I held Within Magic by Day Leitao on my hands.

New magical places. More dangerous enemies. Challenges that will test their love and friendship. Within Magic is such a heartfelt finale for Portals of Whyland!

After the teleportation towers got destroyed, Karina was back on her own dimension. Without a way to get back to Whyland, Karina tried to live a normal life, but her dreams that Sian was in danger haunted her. When a stranger claimed to know a teleportation tower, Karina, together with her friend Chloe, went to meet him. Karina’s situation got more complicated when she opened a portal to Lumina, one of the ethereal cities which had been isolated for a long time. She ended up being tricked and kidnapped by the royalties of Lumina so that they could use her abilities for their own good.

On the other hand, Sian was in Marisia, who was fulfilling his promise to defeat their current king. It was an impossible task, for the King was undefeated and very powerful. His only shot was to follow odd advice of a woman in his dream.

Things were running smoothly in Whyland: Darian became the Grand General, and Cayla was practicing and improving her abilities and skills. When Lumina attacked, Darian and Cayla were forced to evacuate to Light Gardens, the place where Darian grew up.

I love how this series just got better and better. There’s always a change of tone and atmosphere in each book that gives you different reading experience, but Day never fails to include humor in her writing. I like how each character faced hard situations on their own to develop and grow their personalities. There were a lot of things that happened that’s why I felt that this book is too short to cover and give more details to them. Nevertheless, I really enjoyed the fast-paced plot.

The main characters are developed and fleshed out. Comparing them to the first book and novella, I can see how they have come a long way. If you read my reviews of the later books, you probably know that Sian is my favorite character. Also, he’s one of the reasons why I love this series. I love him for his sarcastic, morally gray attitude, and I love him, even more, when he finally is learning about himself. Through his experiences, he gained experience and realizations to become better. He became opened facing his emotions rather than burying them. On the other hand, Karina becomes more determined and head-strong. She doesn’t just sit and wait for a miracle to happen. She finds a way to get back to Whyland and help her friends and Whyland, even when it can cause danger to herself. Lastly, Cayla and Darian both matured and their relationship takes to the next level.

Although this is the last book, I’m hoping that I can see more of Sian and Karina. I’m quite sad to say goodbye to this series, but Portals to Whyland will be always in my heart.

Day was born in Brazil and has always loved to write stories. She’s a Star Wars geek and lives in Montreal, Canada, with her son.

Book Feature: The Last Lumenian Series
🗡️BOOK TOUR + INTL GA🗡️
🌿BOOK TOUR + US GIVEAWAY🌿
Q: How many languages do you speak?
Q: Would you rather only be allowed to read new releases OR only be allowed to read classics?
🍂BOOK COVER REVEAL🍂
Q: You would become one of the Four Horsemen of the Apocalypse. Who would you be based on your battery percentage?
Book Review Excerpt: Of Blood and Fire by Ryan Cahill - 4.5/5 stars! 🌟
QOTD: Would you rather inherit money or a dragon's egg?