Title: Patron Saints of Nothing

Add Patron Saints of Nothing on Goodreads!

A powerful coming-of-age story about grief, guilt, and the risks a Filipino-American teenager takes to uncover the truth about his cousin’s murder.

Jay Reguero plans to spend the last semester of his senior year playing video games before heading to the University of Michigan in the fall. But when he discovers that his Filipino cousin Jun was murdered as part of President Duterte’s war on drugs, and no one in the family wants to talk about what happened, Jay travels to the Philippines to find out the real story.

Hoping to uncover more about Jun and the events that led to his death, Jay is forced to reckon with the many sides of his cousin before he can face the whole horrible truth — and the part he played in it.

As gripping as it is lyrical, Patron Saints of Nothing is a page-turning portrayal of the struggle to reconcile faith, family, and immigrant identity.

I received an advanced copy of this book from Penguin Random House. Opinions expressed in this review are completely my own.

As a timely and relevant narrative especially to Filipino readers, Patron Saints of Nothing explores the importance of family and home, grief and regrets, and the belief in the basic goodness of mankind despite the flaws, injustice, and corruption that surrounds us.

At first, I just wanted to read this book because of its Filipino representation. However, this novel gave me so much more. The story follows Jay, a Filipino-American teenager who travels to the Philippines to find out the truth behind his cousin’s mysterious death. Plotwise, it is interesting and gripping. Randy Ribay wrote this story in a simple way and language but still invoked so many emotions that filled each page. Jay’s journey filled me with sympathy and concern. I like the complexity and the challenges Jay has to face while finding the truth. The description of the good and bad things was unbiased. Ribay didn’t fail to capture Filipino’s traditional family values such as being respectful to elders. Also, he even showed some toxic mentalities that unfortunately still practice nowadays. This novel has many interesting characters as well. People are not always what they seem.

A lot of interesting topics and issues are discussed in this book. Mainly, it is about the steely war on drugs in the Philippines led by the current president Rodrigo Duterte. The policy is aimed to neutralize illegal drugs which are rampant in the country. It gains a lot of criticisms because of its consequential horrors. A lot of people were killed, and some people on the authority are abusing it to kill even innocent people. Hearing and seeing these things every day is really disheartening, especially when a lot of lives were lost. This novel raises questions about this complicated war: Does the end justify the means? Is this the right and best solution, or is it just a resolution that offers false comfort and security? Are the people who believe in the war evil, or are they just doing their job that they think the best for their family and country? Until when this war ends?

Although Patron Saints of Nothing is not faultless, it softly spoke to me from the beginning until the very end. Maybe it is because this places high regard and significance on the sense of family and purpose. Or maybe because this book allows other readers to grasp the gravity of what truly is happening in the Philippines. Regardless of which, Jay’s story hits too close to my heart.

Amidst the sorrowful atmosphere, Patron Saints of Nothing ends as a powerful novel that is full of hope, love, and truth. 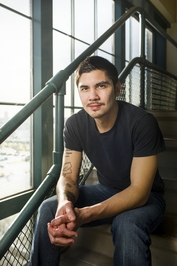 Randy Ribay is the author of the contemporary YA novels AFTER THE SHOT DROPS (Houghton Mifflin Harcourt, 2018) and AN INFINITE NUMBER OF PARALLEL UNIVERSES (Merit Press/Simon & Schuster, 2015). He’s also a high school English teacher, reader, gamer, watcher of great TV, husband, and father of two dog-children. He can probably be found somewhere making lightsaber sound effects with his mouth.

4 thoughts on “Book Review: Patron Saints of Nothing by Randy Ribay”